Your first obligation when you don the priestly robes is to really feel all those that went before you deep inside. Your second is to maintain their momentum and light the way for the continuation of their work. Your third obligation is to bequeath to your son a powerful commandment: he must surpass you!
Νikos Kazantzakis, Ascesis: The Saviors of God

In Ancient Greece, the Athenians set themselves the goal of developing their spirit and ethos in harmony with one another. When we talk about education, we often identify it with knowledge and specialized training, and yet knowledge is a coefficient of education, not education itself. Education is directly bound up with its aims, which are different in every era. 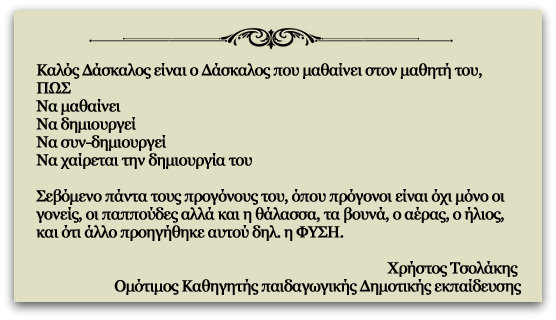 A Good Teacher is the Teacher who teaches his student
HOW
To learn
To create
To create with others
To enjoy their creation.

And is respectful of his predecessors at all times, where these predecessors are not only their parents and grandparents, but the sea, too, the mountains, the wind, the sun and everything else that was before him, meaning NATURE

One of the most pressing issues facing the modern Greek state following its establishment in the early 19th century was the need for Greece to acquire a national identity. Some Greeks chose to search for it in a return to the glories of Ancient Greece, others in an unbroken tradition of Greekness going back to antiquity. Georgios Lampakis would contribute to the efforts being made to prove this continuity by founding the Christian Archaeological Society and the Christian Museum, the forerunner of today’s Byzantine and Christian Museum, in 1884.

Both approaches shared a prerequisite: education and culture. Now, in the 21st century, globalization is forcing the Greeks to once again attend to their national identity. Greeks today are being called upon to answer two fundamental calls:

The core elements of the Greek national identity are:

Greece, like every nation, should design educational policies that reinforce the core elements of its national identity. In so doing, they should be guided by the mechanisms by which citizens identify their personal and collective identities, undertake their personal responsibilities, and know themselves. This is why every institution, public or private—and especially those involved in new technologies, IT and communications—should be brought in to serve education, but in a way that remains respectful of our national roots.

It is this approach—that of the contemporary Greek citizen (and schoolchildren and young people in particular, through education) remolding their national identity, personal and collective, recognizing the values that have underpinned Greekness down the ages, and struggling to achieve a balance between these and the current values of globalization—that the Lampakis Family Archives have elected to work towards. The LFA’s decision chimes with, and could be considered a continuation of, the work of the three Lampakis brothers who shared the same vision in the late 19th century. The LFA hopes to achieve its goal in two ways: firstly, by showcasing its collections, and secondly by organizing educational programmes and events which serve to spotlight Greek arts and letters.

The LAMPAKIS FAMILY ARCHIVE consists of the collections of Ioannis, Georgios and Emmanouil Lampakis.

The Lampakis Family Archives would like to hand over this tradition—these cultural elements and values from the past—to people in the present, so that they may be preserved for future generations. In an era which calls everything into question, as Zoe Karelli wrote: “The genuine Greek tradition might just provide the support we need”.

While the primary goal of the Lampakis Family Archives must be to preserve, organize and house the collections of the Lampakis brothers, the LFA’s administrator, Ioannis E. Lampakis, is determined to see the material they contain help strengthen Greek national unity and cultural development.