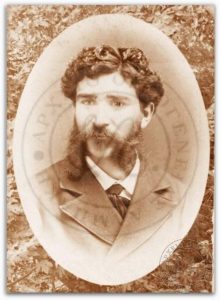 Having completed his secondary education, he worked in his father’s pâtisserie on the corner of Aiolou and Mitropoleos streets.
He first became interested in photography around 1870. In 1873, he collaborated with the photographer E. Philippides with whom he mostly photographed Byzantine manuscripts and churches, most probably for his brother Georgios.
In 1875, he exhibited photographs at the Third Olympia in Athens, where his “various portraits” earned him a special mention

Circa 1880, he began his collaboration with the Margaritis & Konstantinou photographic studio as an assistant. When he later became a partner, the firm changed its name to “Margaritis, Konstantinou & Lampakis”.

In 1890, Ioannis Lampakis photographed the Carnival festivities which, known as the ‘Dionysia’, were experiencing a revival in Greece at the time. His shots of the carnival floats and masked revellers capture the high spirits and spontaneity of the crowd.

In 1892, he photographed the gymnastic and athletic games.

In 1896, he photographed the first International Olympic Games in Athens, and went on to publish the only known album covering these games. The album presents his ground-breaking view of the games in 35 photographs which avoid the usual portraits of athletes posing before or after their events in favour of a more holistic view of the competition in progress (what we would today call photo reportage). His photograph of Neo Faliro, where the regatta was to have been held but was cancelled due to stormy seas, is indicative of this approach.

In the Graeco-Turkish war of 1897, Ioannis Lampakis photographed Queen Olga tending to the wounded as a nurse.

Note: The Lampakis Family Archives permits you to view, copy and print material published on this website on the condition that the material: (a) is destined for personal and not commercial use; (b) that it is not changed or altered in any way; and (c) that it retains the copyrights notices in their original form. The entire contents of the website are protected by Law 2121/1993 on Intellectual Property. No part of this website can be reproduced in any form or by any means without the prior written permission of the Lampakis Family Archive.

This website uses cookies to improve your experience while you navigate through the website. Out of these, the cookies that are categorized as necessary are stored on your browser as they are essential for the working of basic functionalities of the website. We also use third-party cookies that help us analyze and understand how you use this website. These cookies will be stored in your browser only with your consent. You also have the option to opt-out of these cookies. But opting out of some of these cookies may affect your browsing experience.
Necessary Always Enabled

Any cookies that may not be particularly necessary for the website to function and is used specifically to collect user personal data via analytics, ads, other embedded contents are termed as non-necessary cookies. It is mandatory to procure user consent prior to running these cookies on your website.